A Comprehensive Guide to Arabic Verbs 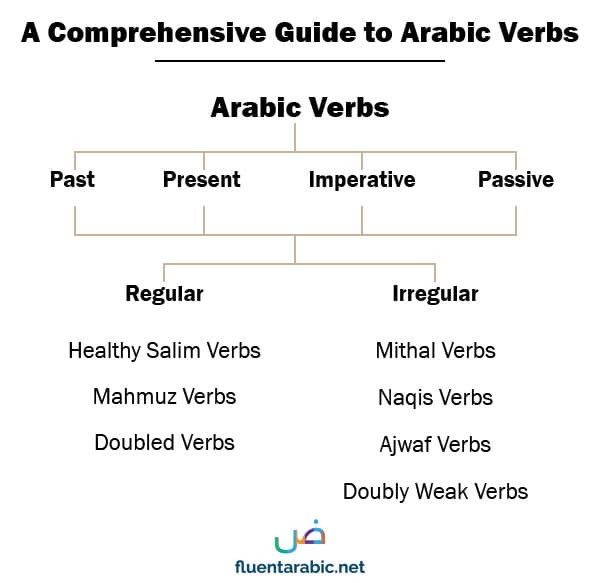 Understanding the grammar of verbs is essential to your mastery of Arabic. Fortunately, the verb system in Arabic is fairly straightforward and not too difficult to grasp.

So here we attempt to explain the core rules of the Arabic verb. Mastering these rules can insha Allah provide you a strong foundation which will help you along on your Arabic journey.

Three Cases of Verbs in Arabic

Every verb in Arabic has 3 forms: Past, Present and Command tense.

If you have noticed, the patterns are different for each of these examples. We will come to the reason in the later sections.

The past tense verbs are divided into different forms based on person, gender and number.

The student read the book.

The student (female) read the book

The students (female) read the book.

The present tense verbs are also divided into 14 forms according to person, gender and number:

The imperative or command tense verb is always used in the second person. Therefore each verb can occur in all these forms:

The Imperative differs for different types of verbs. We will look at this in detail in the following sections.

The root of these verbs does not include a weak letter (و ، ا ، ي), so they are regular verbs (i.e. their conjugation is regular).

The Healthy Verb has three types:

The Healthy Salim Verb does not have a hamza, doubled letter or sick letter.

Mohammad went out of the class.

Rules to keep in mind:

How do you determine the imperative for each of these verbs if you were speaking to a female?

Not sure? Read the section on imperatives again.