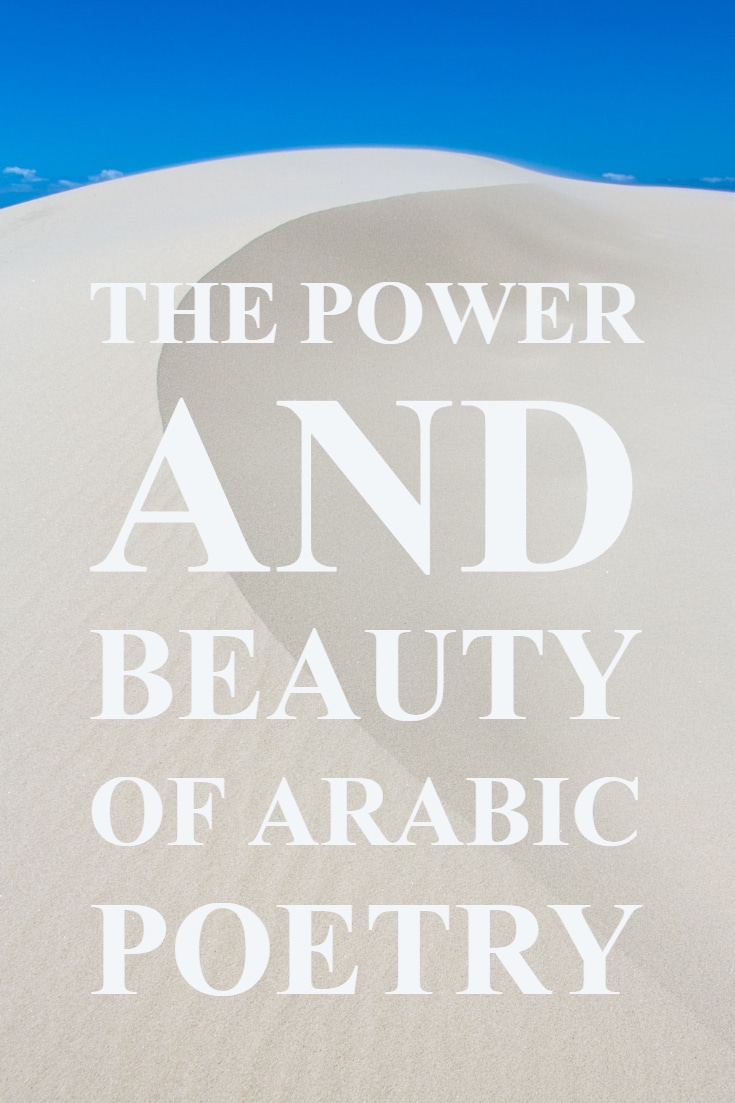 Arabs And Their Love For Poetry

There has never been a nation in history that valued and cherished poetry like the Arabs did. Poetry has never had an effect on a nation like it did on the Arab nation. A single sonnet of praise could raise an entire tribe to the highest level of glory, honor and fame. Whereas a disparaging verse could throw it into the abyss of disgrace and shame. It had the power to ignite wars and to send armies to the battlefields. The poets were honored and held in high esteem. The kings and caliphs used to lavish them with gifts and titles. Many of them had their own poets who chronicled their achievements. 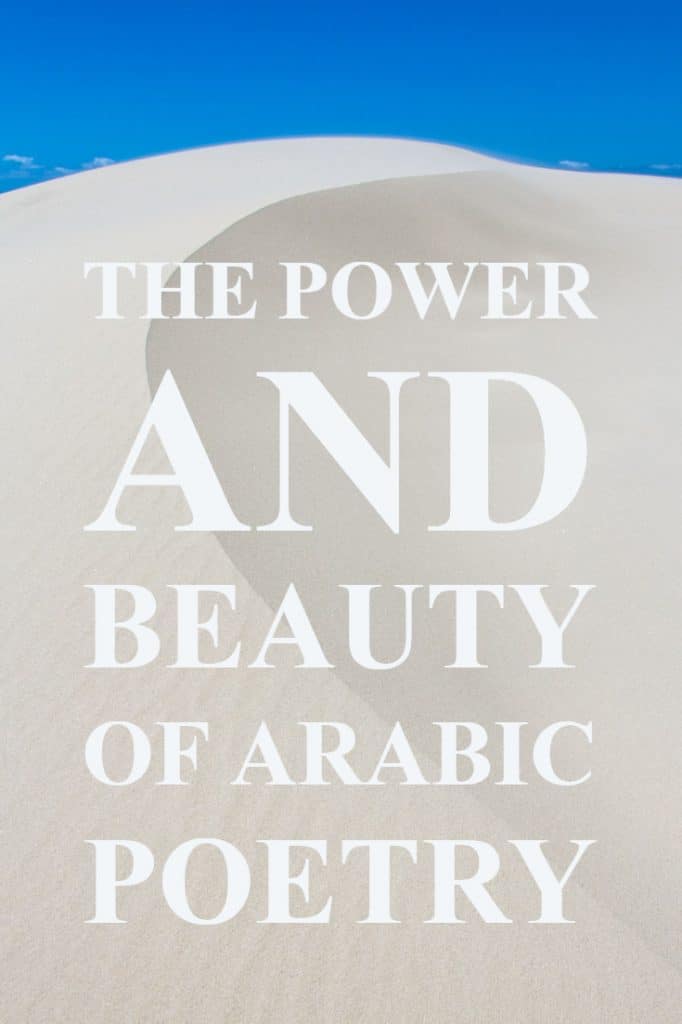 Poetry was highly valued by the Arabs before Islam. Any tribe that discovered a talented poet in its midst would hold feasts and invite other tribes who would come to congratulate them. They would celebrate this triumph for days. The women would gather and play the ‘ud like they do in weddings. This celebration is due to the fact that a poet in those days was the defender of the tribe’s honor, and the preserver of its legacy through his poetry. The quality of the poetry determined the extent of its propagation. High quality ensured wide spreading reach and more popularity.

A single sonnet of praise could raise an entire tribe to the highest level of glory, honor and fame. Whereas a disparaging verse could throw it into the abyss of disgrace and shame.

The Status Of Poetry Under Islam

This appreciation of poetry carried on in Islam. Prophet Muhammad (P.B.U.H) had his own poets, like Hassan bin Thabit and Abdullah Bin Rawahah. The prophet used to place a pulpit in his mosque for Hassan to deliver his poems. Poets from the other tribes in Arabia also used to come and deliver their poems in front of the prophet. The second caliph ‘Umar bin Al-Khattab wrote to his governor Abu Mussa Al Ash’ari to instruct the people under his constituency to learn poetry, asserting that it teaches moral values, proper judgement and lineage. Likewise, Mu’awiyah, another companion of the prophet and a caliph, used to say: “A man should educate his child, and the highest level of education is literature”.

‘Umar wrote to his governor Abu Mussa Al Ash’arito instruct the people under his constituency to learn poetry, asserting that it teaches moral values, proper judgement and lineage.

Learning poetry, memorizing and transmitting it was very essential to the companions of the prophet. ‘Aishah was known for her vast knowledge of poetry. She used to memorize all Labid bin Rabia’s poetry. According to some narrations, she memorized more than twelve thousand lines of his poetry. Abu Al-zinad once said to ‘urwa bin Al-Zubair (‘Aisha’s nephew and one of the most famous scholars among the Tabi’un): “I have never seen anyone who knows poetry more than you”. To which ‘Urwa replied: “my knowledge of poetry is nothing compare to that of ‘Aishah, nothing has ever occurred to her except that she cited a poem or a verse that is relevant to it.

According to some narrations, Ayesha (r.a) memorized more than twelve thousand lines of labid’s poetry.

‘Umar bin Al-Khattab was a great poetry critique . He used to evaluate the poems of different poets and compare and contrast between them. It has been reported that ‘Umar bin Al-Khattab has never said or done anything of significance except that he quotes a poetry related to that matter.

‘Abdullah ibn ‘Abbas used to cite poetry a lot to explain the verses of the Quran. He used to say: “If your read something in the Quran that you do not understand then look for its meaning in the poetry of the Arabs, for poetry is the Diwan of the Arabs”. His story with the Kharijite Nafi’ Ibn Al-Azraq and the eminent poet ‘Umar bin Rabi’ah is well known. The legacy of citing poetry to explain the Quran was preserved by the exegetists (Al-mufassirun). The books of Tafsir are filled with verses of poetry.

The Influence and Power of Poetry

The power of poetry in shaping and altering the fortunes of tribes and individuals will be illustrated through the following examples:

There was an Arab tribe called “Banu Anfun-Naaqah” (the descendants of the camel’s nose), a derogatory nickname that was given to them, because one of their grandfathers once slaughtered a camel, distributed all the meat and forgot his son. His wife sent his son to collect his share of the meat. However, there was only the head of the camel that was left, so he handed it to the boy, who inserted his fingers inside the camel’s nose and set off dragging it in the streets. From that day on he was known as Anfun-Naaqah. Likewise, his descendants were to be nicknamed Banu Anfun-Naaqah. A label they were ashamed of and tried to hide by attributing themselves to Qurai’ the father of Anfun-Naaqa instead.

However, one day this tribe hosted the great poet Al-hutayah, they honored him and treated him with kindness. As a token of appreciation from the poet he wrote a poem in which he said:

“They are the nose and everyone else is a tail. Who would equate a nose of a camel to its tail?”

He cleverly twisted the conception of this nickname from conveying a pejorative meaning to a positive one. This was a paradigm shift that turn Banu Anfun-Naaqah from a tribe ashamed of its own name to one that is proud of it. And all of this was only achieved through a single line of poetry.

There was also a man in pre-Islamic Makkah with restricted means, called Al-Muhallaq. He had many daughters that he was struggling to marry off with no success due to the lack of financial means. However, he had an intelligent wife who once said to him: The great poet Al-A’shah is coming to Makkah, he’s a very eloquent man with an unmatched repute in poetry. He has never praised a man except he elevated his status and never denigrated a person except he destroyed his rank in society. While you are a poor man with no reputation who has many daughters. And we have a milk camel, So if you could just be the first person to invite him over and slaughter our camel for him, while I contrive a way to find some money to buy him drink it would be great for our future. Al-Muhallaq heeded his wife’s advice and invited Al-A’shah over before anyone else. He slaughtered the only camel he has for him, fed him the best parts of the camel, offered him delicious dessert and wine. After the wine had took its effect on Al-A’shah, he asked Al-Muhallaq about his situation and his family. Al-Muhallaq insinuated his hardship and struggle as well as his daughters whom he was not able to marry off. Al-A’shah reassured him and told him to worry no more about his daughters, for he would take care of the matter.

The next morning, Al-A’shah went to ‘Ukaz (a market place famous for poetry delivery and competitions) and delivered a poem in which he praised Al-Muhallaq for his hospitality and generosity. Upon hearing this, people rushed to congratulate Al-Muhallaq and propose to his daughters. All the rich and noble families in Mecca were competing to get a hand of one of his daughters. Within a day, all his daughters were married to a noble and rich family because of Al-A’shah’s poem.

Banu Numair and a Single Line of Poetry

On the other hand, there were some tribes that were looked up to, enjoyed a high status among the tribes and were proud of their tribes, only to be disgraced by a single verse. This was the case of Banu Numair. Banu Numair was one of those tribes that were very proud and was highly esteemed by other tribes. So much so that if one of its members was asked about his tribe, he would haughtily bolden and stretch his voice and say from Banu Numair. However, all this came to an end once the distinguished poet Jarir satirized one of their poets and nobles, Alra’i Al-Numairi, with a poem in which he said:

“lower your gaze, for you are from Numeir; You have neither reached the rank of Ka’b nor that of Kilab (two tribes that were considered the lowest of all tribes)”.

This verse was the last nail on the coffin of Banu Numair’s pride and superiority. From that day onward, all that pride was dissipated and became of the past. They even became ashamed to ascribe themselves to their father Numeir and started to ascribe to their great grandfather ‘Amir instead.

Banu ‘ajlan was also among those tribes that were revered and respected. They were proud of their name ‘ajlan, which were bestowed upon them as a result of their father’s hastening in hospitality. This pride lasted till the day a poet called Al-Najashy lampooned them in a poem that was widely circulated. They were so outraged and humiliated that they complained to the Caliph ‘Umar bin Al-Khattab.

These are just few examples that aim at demonstrating the significance of poetry in the Islamic and Arabic history and culture. Many other cases could be found in the books of history and literature. However, the objective here is not to exhaust all of them in this article; rather, it is just an attempt to give the reader a glimpse into this beautiful universe. There will be other articles that will delve deeper into the subject and discuss its themes, history, motifs as well as the most celebrated poets.

As you can see this is a fascinating world which you can access when you learn classical Arabic Fusha. Reading poetry will give you an in-depth understanding of the language and it’s inner meaning which will ultimately lead to a better understanding of the Quran and the Sunnah. That is why the Salaf placed great importance to learning and memorising poetry.