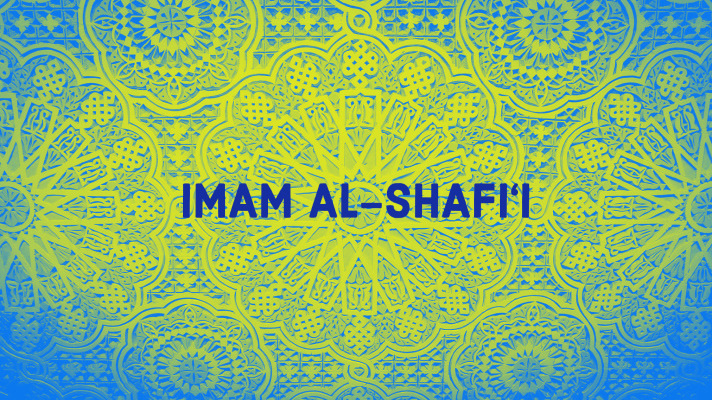 This is a short biography of Imām al-Shāfiʿī that I have translated from Siyar Aʿlam al-Nubalāʾ and some other sources. I have tried to highlight some lesser-known facts and sayings about him.

Abū ʿAbdullāh Muhammad ibn Idrīs al-Shāfiʿī was born in the year 150 Hijri in Gaza, during the Abbasid Caliphate. His father died at a young age leaving his mother to care for him. She then decided to take him to Makkah where he grew up.

He learned Archery, in which he excelled over his peers, and became so skilled that he could hit nine targets out of every ten. He then turned to language and poetry and shined in both. His attention was then brought to fiqh, in which he pioneered, and towered over the people of his time.

He says about himself, “I stayed with the Arabs (bedouins) for 20 years learning their poetry and language, and memorized the Qur’an until there was not a single word in it except that I knew its meaning and connotations — except for two words, one of which was ‘dassāhā’”.(1)

The Travels of Imām al-Shāfiʿī

When he was 15 years old, his teacher Muslim ibn Khālid al-Zanjī told him whilst still in Makkah, “Issue verdicts O’ Abū Abdullah, for it is time for you to issue verdicts”. But he was just getting started in his journey of seeking knowledge.

His first journey was to Madinah to learn under Imām Mālik, to whom he read the Muwaṭṭaʾ. It is said that when he wanted to read the Muwaṭṭaʾ to him, he said, ‘Look for someone to read it for you’, and Imām al-Shāfiʿī replied that he can read it himself. He then read it from his memory. Imām Mālik then said, “If anyone were to succeed, then it is this boy.”

After learning from Imām Mālik he travelled to Yemen, where he learned ʿllm al Firāsah — a science of visual acumen, perception and insight.

He then went to Baghdād, where he learned the fiqh of Imām Abū Ḥanīfah from the scholars of the madhhab.

He then returned to Makkah, where he formulated principles and comprehensive rules of fiqh, from which rulings can be derived for individual issues. His methodology was something unheard of previously. A new school of fiqh was born.

When he returned to Baghdād a second time, he turned the world of fiqh upside down. Previously, if anyone other than the Hanafis tried to teach in the mosques, they would come to them and ask them challenging questions from fiqh and embarrass them. And thus only the Hanafis were able to teach. But when Imām al-Shāfiʿī came, no one had heard the like of his fiqh and knowledge before, and students began to gather around him.

It is reported that Abd al-Raḥmān al-Maḥdī said when he read his book, al-Risālah, “I did not think that Allah has created the likes of this man”.

His final journey was to Egypt. It is said that he asked al-Rabīʿ ibn Sulaymān about the people of Egypt, who told him that some of them were on the madhab of Imām Mālik and rest followed Imām Abū Hanifa. Imām al-Shāfiʿī the said, “I hope to go to Egypt, and bring them something that will turn them away from these two madhabs”. Al-Rabīʿ says, “And by Allah, that is what he did when he entered Egypt.”

His new madhab started spreading so fast that some of the scholars made dua in their sujūd saying, ‘O’ Allah cause al-Shāfiʿī to die so that the knowledge of Imām Mālik is not lost’.

Some of the Sayings of al-Shāfiʿ

Al-Rabīʿ said: I heard al-Shāfiʿī say to some people of hadīth, “You are the pharmacists, and we are the doctors”.(2)

Abū Thawr said: I heard al-Shāfiʿi say, “Every ḥadīth of the Prophet ﷺ is my opinion, even if you have not heard it (i.e. the opinion) from me.”

It is narrated that he said, “If you fear becoming impressed by your deeds, then remember Whose pleasure you seek, and what blessing you desire, and what punishment you fear, For the one who thinks about these, belittles his deeds.

Al-Ḥarmalah said, “Al-Shāfiʿī was asked about a person who had a date in his mouth, and said, ‘If I eat it, then my wife is divorced, and if I spit it my wife is divorced.’ He said, ‘Let him eat half and spit out the other half.”

The Virtues of Imām al-Shāfiʿī

Ibn Abd al Ḥakam said, “I have not seen al-Shāfiʿī debate anyone except that I pitied him. If al-Shāfiʿī debated you, you’d think you were being eaten by a beast of prey. He was the one who taught the people [the art of] establishing the argument.”

Al-Ḥarmalah also said: al-Shāfiʿī said, “I used to teach the people the Qurʿan when I was thirteen years old, and I memorised the Muwaṭṭaʾ before puberty.”

Imām Aḥmad walked beside al-Shāfiʿī holding the reins of the animal he was mounting. When Yaḥyā ibn Maʿīn heard of this, he was upset and criticised Imām Aḥmad, as he saw this to be beneath him. Imām Ahmad replied to him, “Yes O’ Abū Zakariyyah, had you taken the reins on the other side you would have benefited. By Allah, the one who wants to learn fiqh, let him accompany al-Shāfiʿī.”

Aḥmad ibn Salamah al-NaysAbūri said: Isḥāq ibn Rāḥawayh married a woman whose previous husband owned the books of al-Shafiʿī, and had passed away. He did not marry her except for the books.

1.He read the entire Qur’an and there was only this word and another one (which he forgot), which he did not know of in the speech of the Arabs. He then read a narration from Muqātil ibn Sulaymān that  ‘dassāhā’ (Qur’ān 21:10) is from the language of Sudān meaning ‘to corrupt it’. Please note that there is an unknown person in this narration’s chain.

2.Imām Aḥmad said, “The people of hadith are like pharmacists and the people of fiqḥ are like doctors. As for al-Shāfiʿī, he was both.