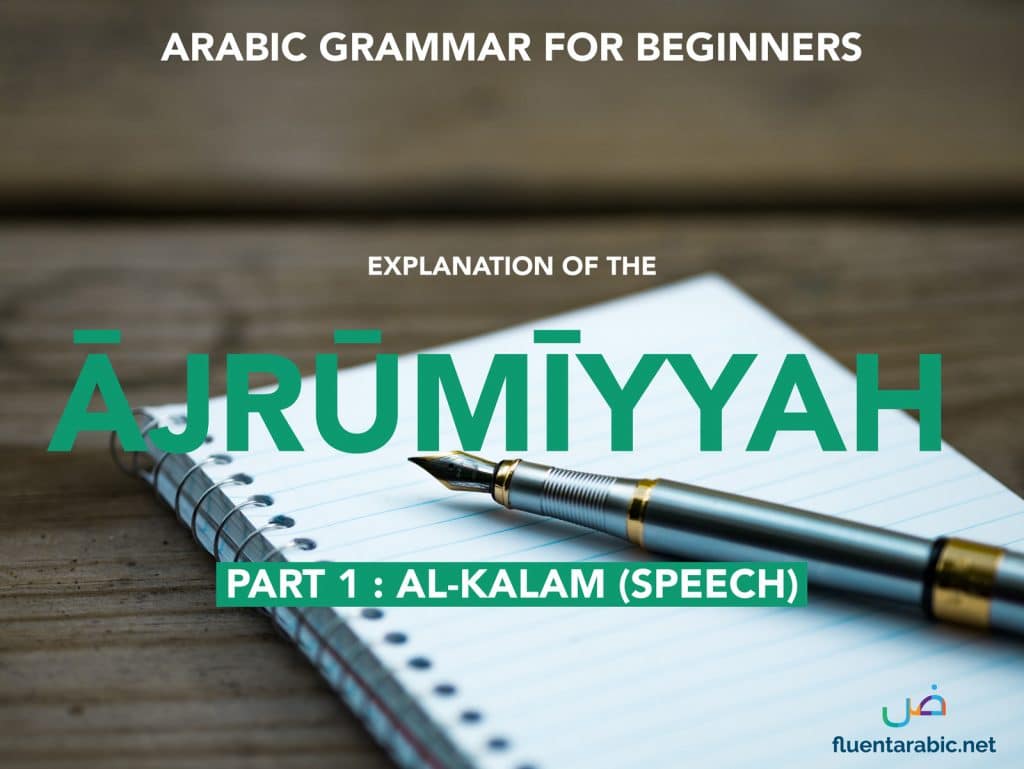 Al-Ājrūmīyyah is a classical Arabic grammar book written in the 13th century by the Moroccan scholar Muhammad ibn Da’ud as-Sanhaji. It is considered the go-to book for beginners to learn Arabic grammar across the Arab world.

Before You Get Started With This Series:

This series is not for absolute beginners.If you are a complete beginner, I highly recommend getting started with my free Arabic Essentials 10-day Email course. In this course, we will cover fundamental concepts like the types of sentences in Arabic, forms of the verb, basic vocabulary etc. Once you get the basics down this course can help you get a complete overview of Arabic grammar, insha’Allah. This will give you insights into the workings of I’rab, and a better understanding of Arabic. To keep things short, these posts are written in a very condensed manner. This series is also available on Youtube:

Translation: Speech: It is the beneficial composed utterance that conforms (to the rules of Arabic)

What is speech? Here we find the definition of speech: Any composed utterance that is beneficial in the Arabic language.

Translation: And it is divided into three types: noun, verb and particle that conveys meaning.

This is an extremely important classification that will help you determine the I’rab of any text. All Arabic speech is classified into 3 parts – Nouns, verbs and particles. If you know which one the word is, it will make it much easier to know the I’rab for it. In the next paragraphs, the author explains how to recognise nouns, verbs and particles.

Translation:  And the particle is that which does not accept any of the indicators of the noun or the verb.

How do you tell if a word is a noun, verb or particle?

Let us analyze the following sentence:

ذَهَبَ is clearly a verb representing an action (he went). مُحَمَّدٌ and بَيْت  are clearly nouns. And finally, إِلَى is a particle. Pretty straightforward right?

But what if the sentence is slightly more complex?

Is the word جَالِسٌ a noun or a verb? When the sentences get slightly more complex, it is often difficult for the beginner to classify them into one of the three groups we discussed. And this is where these simple rules can help you.

Let us go back to the text now.

The Noun is recognised by three things:

Now let us apply the first rule to the word جَالِسٌ. Let us take one of the letters of H̱afdh mentioned by the author, and apply it to جَالِسٌ to make it majrūr: If جَالِسٌ is preceded by إِلَى then it becomes  جَالِسٍ. As we know جَالِسٍ is a correct word, we can now be sure that according to rule one, it is a noun.

Let us try rule two now. As you can see, the word clearly accepts a Tanween. Therefore it is a noun.

And finally, rule three. Can it accept the alif-lam? الجَالِسُ is a correct word. Therefore, according to rule three, it is a noun as well.

Now, let us move on to the verb. The verb can be recognised if it can be preceded by any of the following:

Or if it can have the ت of the feminine at the end.

So let’s try that on جَالِسٌ again. Clearly, قَدْ جَلِسٌ  or سَجَالِسٌ and سَوْفَ جَالِسٌ are all wrong. So it is clearly not a verb. But let us try that on ذَهَبَ which we know is a verb. You can’t add سَوْفَ and سَ to ذَهَبَ as it is in the past tense. But  قَدْ works fine. You can say:

Therefore clearly ذَهَبَ is a verb.

The last part, the ‘ẖarf’ or the particle can be identified by the process of elimination. If it is not a noun or a verb, then it is a ‘ẖarf’. Try applying the rules of the noun and the verb, that we discussed to إلَى. You will notice that it does not conform to any of the rules. So as it is neither a noun nor a word, it is a ‘ẖarf’.

That concludes the first chapter of Al-Ājrūmīyyah on ‘Types of speech’. This classification is the first step to understanding the I’rab.

Study the infographic below carefully to recall the rules we have learned in this chapter.