Arabic Grammar For Beginners Based On Al-Ājrūmīyyah (Part 3: Indicators of I’rab) 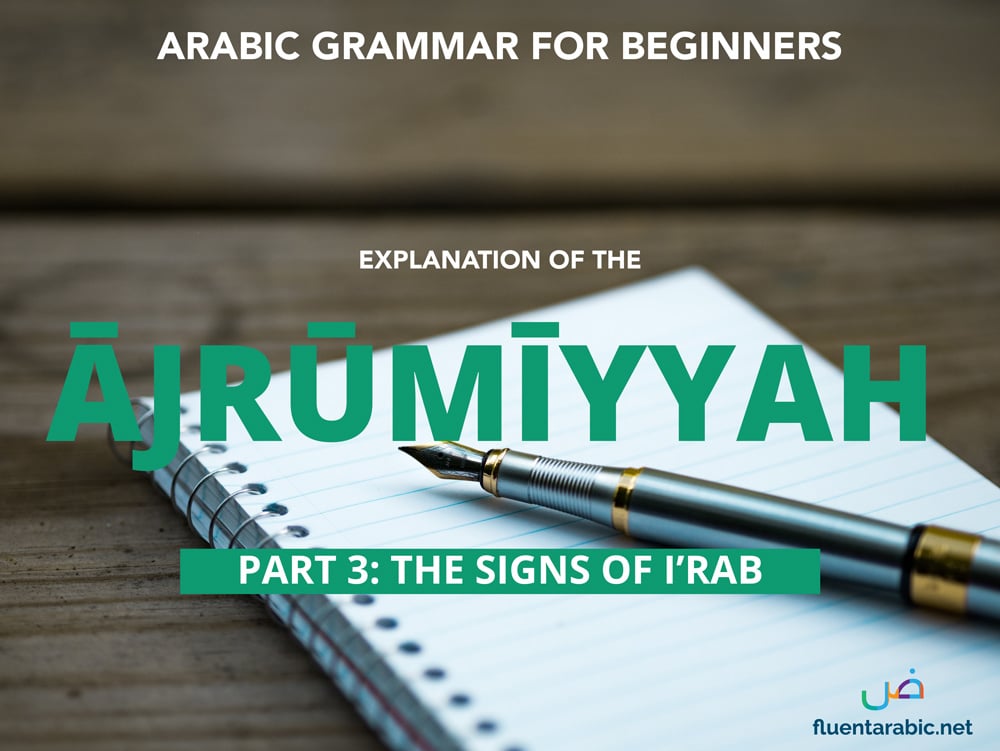 Chapter 3: Knowing the Signs of I’rab

However, we will use a methodology used by some Shuyukh that I find much simpler. We will explain the cases in which the grammatical state is indicated by other than its default indicator – dhamma for Raf’, fatha for Nasb, kasra for Khafdh and sukun for Jazm. Also, the information is presented in tables which are easy for you to understand, insha’Allah.

First, let’s look at the Matn,

“For the state of Raf’ there are four indicators: dhamma, waw, alif, and nun.

As for the Damma, it becomes an indicator of Raf’ in four instances: 1) Singular Noun 2) Broken Plural 3) Sound Feminine Plural and 4) Present Tense Verb with nothing attached to its end (like the Feminine Nun or the Nun of confirmation)

As for the Waw, it becomes an indicator of Raf’ in two cases: 1)The Sound Masculine Plural and 2) The Five Names, and they are: Abooka, Akhooka, Khamooka, Fooka and Dhoo Malin.

As for the alif, it is an indicator of Raf’ only for the dual form of nouns.

As for the Nun, it is an indicator of Raf’ for the present tense verb when it is connected to the dual or plural pronoun, or if an attached pronoun is used to address a female in the second person.

And (the state of) Nasb has five indicators: al-fatha, al-kasra, al-ya, and the removal of the letter Nun.

As for the Fatha, it becomes an indicator of Nasb in three cases: 1)The Singular Noun 2)The Broken Plural 3)The Present Tense Verb if a particle of Nasb is added to it, and there is nothing attached to its end.

As for the Alif, it becomes an indicator of Nasb in the five nouns: like this:

And in what resembles this.

As for the Kasra, it becomes an indicator of Nasb for the Sound Feminine Plural.

As for the Ya, it becomes an indicator of Nasb, for the dual and plural forms of the noun.

As for the removal of Nun, it becomes an indicator of Nasb in the Five Verbs, in which case the state of Raf’ is indicated by the affirmation of the Nun.

And the (state of) Khafdh has three indicators: Kasra, Ya and Fatha.

As for the Ya, it becomes an indicator of Khafdh in three cases: 1)The Five Nouns 2)The Dual Form 3)The Plural Form

As for the Fatha, it becomes an indicator of Khafdh for the nouns who are fixed (mamnu’ min as-sarf)

And for the (state of) Jazm, there are two indicators: The Sukun and Removal,

As for the Sukun, it becomes an indicator for Jazm in the present tense verbs which end with a sound-letter (other than ي، و،ا).

As for Removal, it is an indicator of Jazm for present tense verbs ending with a weak letter ( ي، و،ا) and also for the five verbs in whose case the state of Raf’ is indicated by the affirmation of Nun.”

As we have already seen, in Arabic, words can take 4 grammatical states – Raf’, Nasb, Khafdh and Jazm. This chapter and the one after this deal with the signs that tell us which state the word is in. The chapter makes this look slightly complicated, but we are going to stick to a simplified explanation, that you can grasp easily, insha’Allah.

However, there are other cases where the grammatical state is indicated by other indicators. We will go through these cases one by one.

There are seven basic cases where the I’rab is indicated by other than the default indicator.

In the dual form the states are denoted by alif and ya as shown:

It is the plural made by attaching the waw and nun or ya and nun to the male noun.

The I’rab is indicated as follows:

The plural made by adding alif before the final ‘ta’ in a feminine noun.

Note here that, for Nasb, instead of fatha, kasra is used.

When these nouns are attached with other nouns, they are used as follows:

The States are indicated as follows:

Nouns which don’t accept the tanween or the kasrah. We deal with the details of these nouns later. But the rule pertaining to them is that both Nasb and Khafdh are indicated by fatha.

These are verbs ending with one of the letters of illa: alif, waw or ya: as in:

In this case, the Jazm is indicated by hiding the final letter (the letter of illa).

These are the nouns which have alif and noun, waw and noun, or ya and noun attached to them.

In this case, both Nasb and Jazm are indicated by hiding the nun. There is no Khafdh as it is a present tense verb.

If you study these seven cases thoroughly, you will be able to master the signs of I’rab inshaAllah. To recap the chapter here is the complete list of I’rab indicators: (revise this table until you master it thoroughly)

This section is the repetition of the same concept (indicators of I’rab), but here ibn Ajrum explains it in a different manner. I want you to treat this section as a revision for what we have learned previously. Go through the text and see if you can match it to what is given in the previous table.