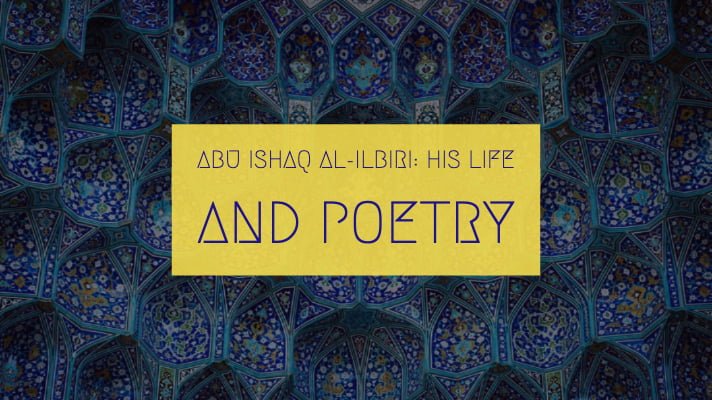 Abu Isḥāq al-Ilbīrī al-Tujībī (d. 459 AH / 1067 CE) was a poet, faqih and zahid (ascetic). He mostly known for his diwan, or his collection of poetry which mainly deals with wisdom, asceticism, piety and the virtues of seeking knowledge.

He was born in Hisn Uqab, from where he later moved on to the larger city nearby by the name of Ibira, which was in the province of Granada. This is where he became famous and aquired the name, ‘Al-Ilbiri’.

We find limited information about Abu Ishaq al-Ibiri in the classical books. The reality is, although he was well known, and his poems reached far and wide, his famous Taiyyah, really became famous in the later stages.

However, the value and beauty of his Taiyyah which calls the reader towards seeking knowledge and leaving the pursuit of worldly luxuries has never been lost opon scholars and students of knowledge.  Throughout history, scholars have instructed their students to memorize this poem.

As for the biography of Abu Ishaq al-Ilbiri, we find information scattered throughout the books of history and literature.

As we mentioned he moved to the town of Ilbira which was later on destroyed. He then moved to the city of Gharnata. Here he came to be known as both a faqih of the Maliki school, as well as a poet.

Later, he became a scribe for the Qadhi Abu Hasan Ali ibn Tawaba with whom he had a close relationship. He was held the Qadhi in high regard and praised him in some of his poetry. This is the only person we find that he praises in his entire diwan.

Meanwhile, his fame and his poetry kept spreading, and he had become very well known by now.

As for the political climate, he witnessed some major changes during his lifetime.

Al-Andalus was under the rule of Muhammad ibn Abi ‘Amir who was then followed by his son. Later the Ummayids tried to recover the power they had lost to ‘Amir and his children. This started the breaking up of al-Andalus to smaller kingdoms, which came to be known as Duwal at-Tawa’if. Al-Ibiri witnessed all these political changes and finally passed away in the time of the Duwal at-Tawa’if a few years before the fall of al-Andalus to the Christians.

When we look back at this period of time we find that the once mighty kingdom of the Umayyads, had lost its former strength and glory. It was now split into many small kingdoms. Most of these rulers immersed themselves in luxury and extravagance. The people too had become occupied with the worldly affairs. And it is in this time of weakness and distraction, Al-ilbiri’s Taiyyah, reminds the people of what is truly important and calls them to return to what would bring them glory and success.

When we look at the current state of the Muslim ummah, we can easily draw parallels to the situation this poem was written in. This is what makes it even more relevant today. It is a beautiful reminder of what is important, composed in a simple and eloquent way. The text is easy for beginners to comprehend with a little bit of assistance.

Some selected passages from his famous Taiyyah:

The passing of days[1] crushes your heart into crumbs,

And hours carve away at your body.

Death calls out to you in earnest,

Whom astute men have divorced irrevocably.

Woe unto you! You sleep through life snoring,

[Thinking] of her until such time as you die and awaken!

Oh how deceived you are! Until when

Will you not hold back from her? Until [when]?!

[2] Young virgins of marriageable age had their own secure quarters (khidr), far from the eyes of men.

He says about knowledge:

He says about knowledge:

It is a treasure for which you fear no thieves,

A light burden that is found wherever you may be.

It increases the more you spend of it

And decreases if you hold on to it [stingily].

About the Dunya, he says:

For this world is nothing—

Ultimately, if you think about it, it is like your afternoon shadow

Translations by Moustafa Elqabbany. He can be reached at [email protected]

Fluent Arabic has published an amazing translation of this poem