5 Reasons Why Learning Arabic is Important for Muslims 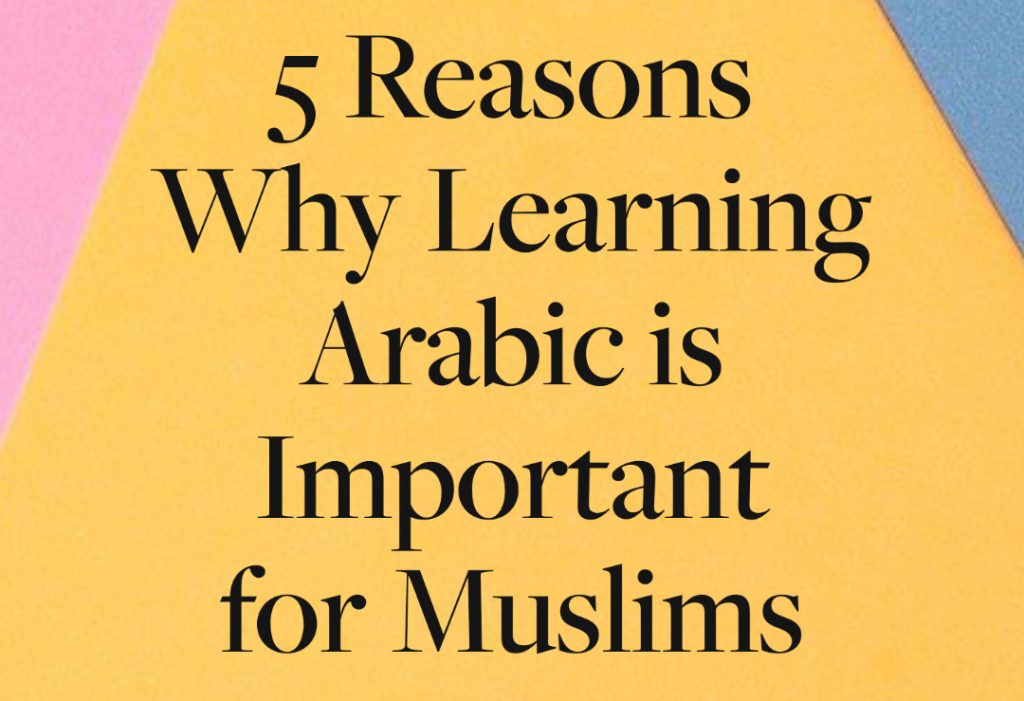 Knowing the Arabic language, even if it’s just at a basic level, it’s a desire found in the heart of most Muslims. But why is it? These are 5 reasons why learning Arabic is important for Muslims.

Many scholars have highlighted the virtues of the Arabic language for its sophistication, its clarity, its comprehensiveness and its rationality, amongst others.

They are also many scholars that have expanded on the rewards of learning it, teaching it, understanding it and using it.

Many books have been authored on this topic. Many of the muhaddithuun (experts in the science of Hadeeth) have included chapters about it in their collections.

Though the best proof of all the above are the Words of Allah:

The interpretation of the meaning is: Indeed, We have sent it down as an Arabic Quran so that you may understand (Quran, 12:2).

This is not the only verse in the Quran where Allah, Most High, emphasizes that the Quran has been sent in Arabic (for example see: 41:3; 20:113).

Allah has chosen this language as the vehicle for His Revelation so that we might understand. And for any person that believes that is enough reason to want to dive, in the measure of each person’s capacity, in it.

What follows are 5 reasons to learn Arabic as a Muslim, which only further demonstrates the above. And a sixth one, which is at the heart of them all.

1. It is an individual obligation (fardu-l-ain) and a communal one (fardu-l-kifayyah).

To know fundamental concepts of Arabic and to have memorised some parts of the Quran is a requirement of the faith.

For example, it was the opinion of Imam Shaafie that:

“It is obligatory upon every Muslim to learn from the Arabic language what allows him to make effort in fulfilling his obligations”. (Irshaad al-Fuhool, p. 421).

What we may understand from this statement from Shaykh al-Islam is that every Muslim must know at least the basic Arabic that allows him to fulfil his religious obligations.

The question remains about how much is enough. Technically, if a person knows the declaration of faith, the first chapter of the Quran (al-Fatiha) and a few verses, that is enough to strictly fulfil his obligations.

Though, as we know, having khushu’ (presence and humbleness in prayer) it’s also an obligation for some scholars (for many others it’s recommended, but it is not a precondition for its validity). And achieving that is easier when you have not only memorised a bit of the Quran, but you are also capable of understanding it.

Ibn Taymiyyah agrees with this view but takes a step further. He says:

What Ibn Taymiyyah is pointing out is that knowing a little bit of Arabic might be enough to fulfil one’s obligations, but that it’s an obligation upon the community that some know it, teach it and learn it in depth because is a requirement to understand the Deen correctly.

2. It is necessary to understand the Quran and the Sunnah

This second reason builds on the above, it seems quite obvious, but there’s more to it than it might appear at the beginning.

The Quran was revealed in the Arabic Language and the Prophet, peace be upon him, spoke Arabic. The only way that we can access that knowledge directly is if we know the language.

And this is not important only for people who seek the sacred sciences, but to a degree, for everyone. It allows you to read the Word of Allah and the Words of His Prophet, peace be upon him, without a translation.

Of course, we know that does not mean that you may derive judicial (fiqh) rulings from it, because that requires a much more comprehensive knowledge including other branches, but you will find tranquillity and guidance in it. Allah, Most High, says:

The translation of which is: Surely in the remembrance of Allah do hearts find comfort.

And He also says:

The translation of which is: Ramadan is the month in which the Quran was revealed as a guide for humanity with clear proofs of guidance and the standard ˹to distinguish between right and wrong˺.

3. To have a correct Aqidah and World-view

The way our human brain works and how our intellect is structured is around language. Language is a vehicle to express and understand meanings and is a way to understand the world.

The words that we use are extremely important because it expresses how we think and what we think. There are many words in the Quran that cannot really be translated into another language without losing some of their meanings. For example, let’s take the word:

The word Taqwa in Arabic means to fear, to guard, to be cautious, but also to be righteous, virtuous, just, and honest. It also means to measure and to be reverential. A definition of Taqwa could be that one is so aware of the reality of God that one is reverential towards Him, and therefore one becomes cautious and guards himself against doing that which displeases Him and fear His punishment. The Prophet was once asked who are the best people, he said:

The translation of which is: The noblest to Allah are the most righteous. (Sahih Bukhari)

As we can see, to grasp this and many other concepts properly, concepts that help us understand the Deen, the knowledge of Arabic is necessary. And the further we go into it, the more we will understand.

4. To think with the Quran

It is reported that Saidina Umar, may Allah be pleased with him, said: “Learn Arabic, for it strengthens the intelligence and increases one’s noble conduct (al-murūah).” (Al-Bayhaqī, Shu’ab Al-Īmān Vol.4 p187.)

As was said before, we need language to think. The more knowledge we have of a language the better we can express ourselves in it and the more elaborated are our thoughts. When we learn Arabic, we are learning the language of the Quran, and that means that we will understand the concepts and terms better and we will be more able to use them.

The more we can use them, the more elaborated our thoughts might be. That way, our intellect strengthens.

Furthermore, the word used for intellect in Arabic many times is فقه as in the Hadith:

The translation of which is: “To whomever Allah wills goodness, He grants him understanding of the religion.” (Bukhari y Muslim)

The tongue is how we express our inner world to others. We express our knowledge, our beliefs, our desires and our fears. It’s the language by which we communicate.

The same as we might dress with dignity and humility, speaking correctly is a way of beautifying ourselves. And what is more beautiful as a garment than the language of the Noble Quran and of the Prophet, peace be upon him?

These are five reasons why learning Arabic is important for Muslims. Not only is necessary but some knowledge of it, at least, could be considered obligatory. But there is one last reason which gives meaning to all the above: Love.